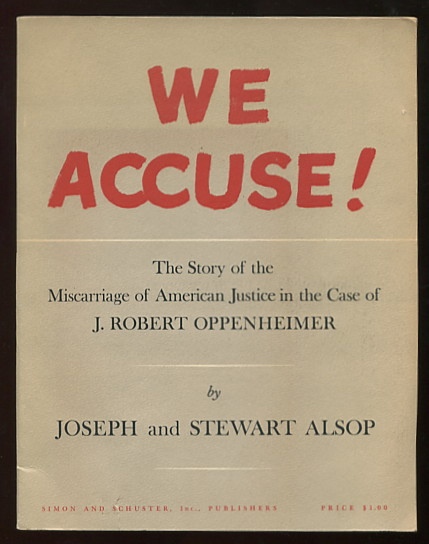 We Accuse! The Story of the Miscarriage of American Justice in the Case of J. Robert Oppenheimer

By: Alsop, Joseph and Stewart

[nice clean copy, short closed tear in bottom edge of front cover, slight bumping/bending to lower fore-edge, some discoloration to a couple of pages from a laid-in magazine clipping about an Oppenheimer-related play by Heinar Kipphardt]. Trade PB A passionate defense of Oppenheimer in the wake of the politically-motivated revocation of his security clearance following hearings by the Atomic Energy Commission in April-May 1954, the book also presents "an indictment of the government's present security system." An Appendix reproduces some of the key supporting documents for the authors' arguments: General Nichols' Letter (this was the letter from Kenneth D. Nichols, the General Manager of the AEC, casting aspersions on Oppenheimer's earlier political affiliations, questioning his loyalty and his fitness for employment by the AEC, and informing him of the AEC's intent to hold hearings on the matter); Dr. Oppenheimer's Reply; Finding and Recommendation of the Personnel Security Board; Minority Report of Dr. Ward V. Evans; Statement of the Atomic Energy Commission; Concurring Opinion of Commissioner Thomas E. Murray; Dissenting Opinion of Henry De Wolf Smyth.

Title: We Accuse! The Story of the Miscarriage of American Justice in the Case of J. Robert Oppenheimer

We Accuse! The Story of the Miscarriage of American Justice in the Case of J. Robert Oppenheimer