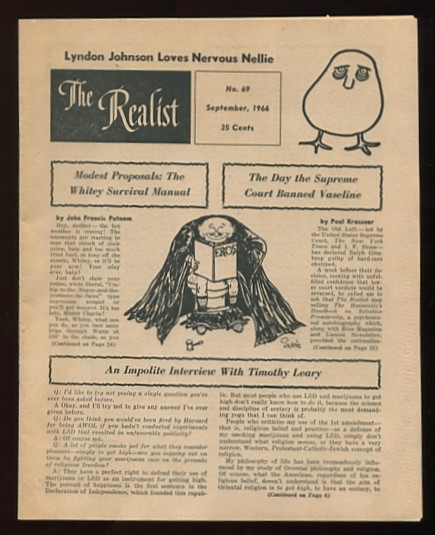 [nice copy, minimal age-toning, no tears or other blemishes]. (cartoons, graphics) A typical issue of Krassner's provocative political/cultural journal. The highlight of this particular issue is "An Impolite Interview with Timothy Leary, which occupies about one-third of the issue's 32 pages. Other features: "The Day the Supreme Court Banned Vaseline," an article by Krassner about his dealings with publisher Ralph Ginzburg, against the backdrop of Ginzburg's unsuccessful appeal to the U.S. Supreme Court of his 1963 conviction on obscenity charges; "Modest Proposals: The Whitey Survival Manual," a tongue-in-cheek guide (by John Francis Putnam) for white people navigating black culture; "The Venereal Revolution," an interview with the 17-year-old co-author of the play by that name, which breaks one of the basic rules of journalism by never telling us the kid's name; "All Systems Go," a playet by Fernando J. Valdivia, set in a sex research laboratory; and a quite politically-incorrect 2-page cartoon feature called "Fag Battalion," consisting of a dozen or so single-panel cartoons by Mort Gerberg, riffing on the idea that "an end to the ban on homosexuals [in the military] would ease the shortage of manpower for Vietnam."