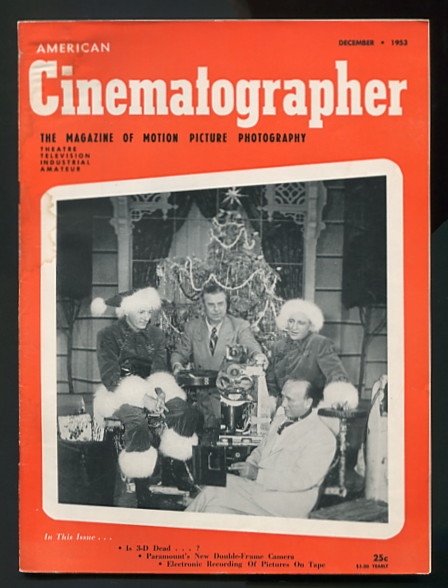 [some dampstaining along the spine (mostly visible on rear cover), bleed-through to a few interior pages]. (B&W photographs, ads) Monthly magazine of the American Society of Cinematographers, a very technically-oriented publication with plenty of information (articles and advertisements) related to the latest equipment, technical processes and production techniques then in use in the Hollywood motion picture industry. Although the film WHITE CHRISTMAS is featured on the cover (with a nice shot of Danny Kaye, Bing Crosby, director Michael Curtiz and cinematographer Loyal Griggs), the tie-in article isn't really about the film itself, but rather about Paramount's "new 'Lazy-8' double-frame wide-screen camera," WHITE CHRISTMAS just happening to be the first film to employ it. Of somewhat more interest is an article about a survey conducted by the magazine's editors on the question "Is 3-D Dead...?"; connected with that is Part 2 of an article by Julian Gunzburg, M.D., called "The Story of Natural Vision." Dr. Gunzburg was a prominent ophthalmologist who along with his brother, screenwrier/producer Milton Gunzburg, owned the rights to the Natural Vision 3-D process, which was used to shoot the film that more or less kicked off the 3-D craze in the early 1950s, BWANA DEVIL.