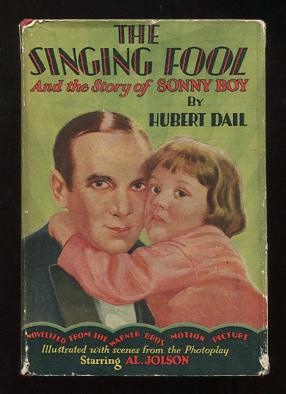 [book is nice and clean with minimal wear, previous owner's label on front pastedown, another owner's pencil signature on front pastedown and small name-stamp on ffep; jacket moderately edgeworn, with a bit of paper loss at several corners]. (8 B&W film stills) Novelization of Al Jolson's second film -- an "all-talkie," unlike THE JAZZ SINGER -- in which he played kind of a version of himself, in this case a singing waiter, "Al Stone," who skyrockets to fame on Broadway "with the help of a producer and inspired by a beautiful but heartless woman with whom he had fallen in love." He marries the heartless woman and they have a child, "Sonny Boy," who is adored by his father, but the wife (also a famous singer) turns out to be "unfaithful and treacherous." They divorce, and she (being "the mother") gets custody of the kid, whisks him off to France and neglects him; he falls ill and eventually dies, devastating his father. However, the show must go on, and it does, and "Sonny Boy" (the song, that is) becomes his signature tune, and eventually he ends up with the good woman (who loved him all along), and is back on top of the world, and they move to California. (The film was a huge hit, and reportedly Jolson's recording of "Sonny Boy" was the first million-selling American record.)