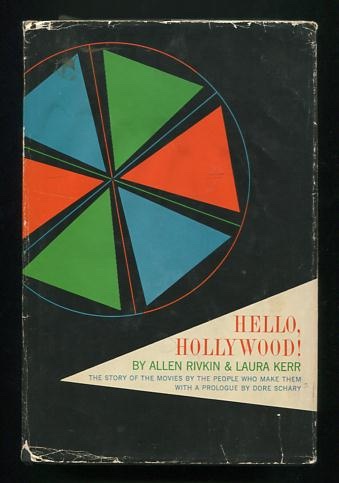 Hello, Hollywood! A Book About the Movies by the People Who Make Them

By: Rivkin, Allen, and Laura Kerr

[light shelfwear, minor bumping to top corners, a good sound copy; jacket is heavily edgeworn, with a few small tears, creasing, internal dampstaining (not visible on exterior), etc.] One of the more interesting and unusual anthologies of writings about life in the movie colony, not least because it rather disguises its anthological nature. This 571-page volume consists of 100 articles and book excerpts (the former drawn from both the industry trade press, such as The Hollywood Reporter and Daily Variety, and more general-interest/wide circulation publications like Look Magazine and The New York Times), yet there is no Table of Contents so that one can easily browse the list and zero in on pieces of individual interest. Rather, the book's front matter is presented in the style of movie credits ("Doubleday & Company, Inc. presents the Rivkin-Kerr Production" etc.), with all the authors' names listed in a single alphabetically-arranged bloc. Rivkin & Kerr (husband-and-wife writers, by the way) provide an interspersed running commentary throughout the book, in the form of a chatty discussion; their credit on the book itself is, in fact, "additional dialogue." This is all very cute and fun to read, and a good many of the pieces have not been anthologized or reprinted elsewhere -- but at the same time, if you spot a writer's name in that list of 100 that particularly intrigues you, you have to resort to the index (thank goodness there is one!) to track down his or her contribution. (In my case the name that jumped out at me was Horace McCoy, whose brief article "I Wish I Were a Writer" first appeared in The Hollywood Reporter in 1935" -- coincidentally (or not) the same year his great novel "They Shoot Horses, Don't They?" was published.) But such editorial caveats aside, the book is still a treasure trove of insightful observations of the movie colony during its heyday. Here's just a small sampling of the writers represented: Charles Brackett, Ray Bradbury, Stan Freberg, Nunnally Johnson, Herman J. Mankiewicz, John O'Hara, Nicholas Ray, John Sanford, Rod Serling, George Stevens, Billy Wilder, and Fred Zinnemann.

Title: Hello, Hollywood! A Book About the Movies by the People Who Make Them

Hello, Hollywood! A Book About the Movies by the People Who Make Them