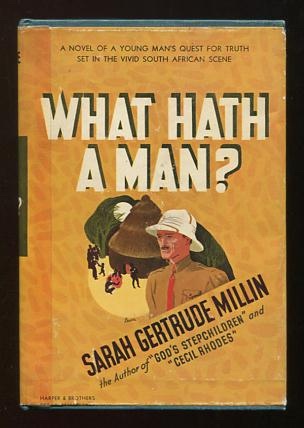 What Hath a Man?

[a good solid copy, apparently an ex-lending library book although with no actual library markings; however, the jacket flaps are firmly affixed to the pastedowns and the jacket spine is covered with a wide piece of clear tape (which is somewhat age-yellowed); the jacket has also been trimmed just a little along the top and bottom edges such that it's about 1/4" shorter than the book; there are also strips of black cloth tape on both pastedowns and both endpapers (which probably at one time held some kind of clear jacket protector in place); all this sounds pretty bad, but actually the book gives quite an attractive impression]. Novel by a noted South African author whose fiction often dealt with the political and social difficulties of her native land. This one is (per the jacket blurb) "a rich and thoughtful character study of [a] sensitive, amiable, religious [young man], armed only with an understanding of beauty and a pity for humanity, [who] set[s] out to find a life for himself in South Africa," but who finds himself with a tortured conscience when facing "the actualities of life and the practical problems of imperialism." The author (1889-1968) was a leading South African literary figure for more than thirty years, but her reputation diminished in the post-World War II years due to her increasingly right-wing views and her support for the National Party’s apartheid policies.

Title: What Hath a Man?

What Hath a Man?