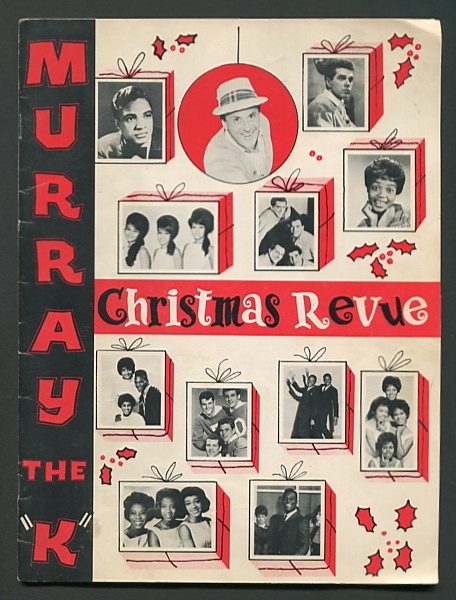 [light external wear, a few horizontal stress lines along spine, short diagonal bends/creases at top and bottom corners of front cover]. (B&W photographs) Original program (20 pages including covers) for one of the multi-racial rock 'n' roll shows staged and hosted several times a year by popular disc jockey Murray the "K" (Murray Kaufman) at various Brooklyn theatres (mostly the Brooklyn Fox) during the early to mid-1960s. This one was the Christmas edition for 1962 (presented on December 27), and the talent lineup was truly mind-blowing, including Jackie Wilson, The Four Seasons, The Shirells, Joey Dee, Little Eva, Dionne Warwick, Sam & Dave, and (as the saying goes) many more! (The "many more," of course, included quite a few one-hit wonders and/or short-lived groups or performers that have long since faded from the memories of all but the hardest-core fans: who remembers The Dovells, The Earls, The Cookies, or Bob B. Soxx and the Blue Jeans?) This particular show also marked a significant stage in the development of another group with an enduring legacy: The Ronettes, who during 1962 were just coming into their own as a group (and who wouldn't hook up with Phil Spector until a few months into 1963). Murray clearly wanted to play them up, evidenced by the fact that he chose to be photographed with the girls (all at a bowling alley, pretending to bowl) in a full-page shot that appears early in the program; their photo also headlines the ad for Colpix Records that appears on the program's back cover. In fact, only Jackie Wilson, the show's headliner, gets more space in the program than the Ronettes (a full-page photo, plus a full page of biographical highlights, plus a full-page ad on the inside back cover exclusively promoting his albums).