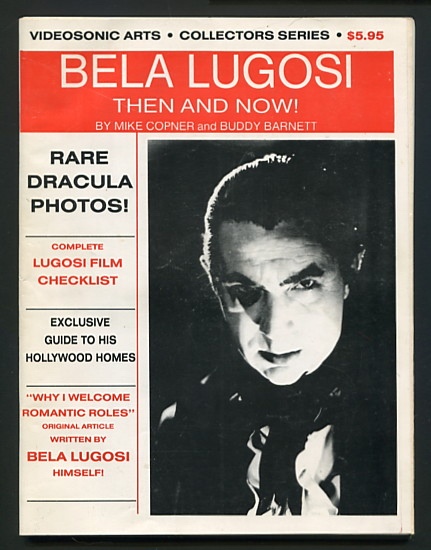 Bela Lugosi: Then and Now!

By: Copner, Mike, and Buddy Barnett

[slight vertical bend, no other significant wear]. (Videosonic Arts, Vol. 1) Series (B&W photographs, movie ad reproductions) 98-page magazine-format publication devoted to Bela Lugosi, featuring "rare Dracula photos," a complete checklist of Lugosi's films, and a reprint of a brief article (dated 1934 but otherwise unsourced) by Lugosi entitled "I welcome the romantic role after being typed as 'heavy'." About half the publication is devoted to a general survey of the actor's life and career and a discussion of several books about him, but there are also a couple of articles of somewhat greater interest. The first, "Bela Lugosi at the Midnite Delicatessen," is a remembrance by Lisa Mitchell of how she and father used to see Lugosi at various places around Hollywood during the last three years of his life (1953-1956), when she was in her early-to-mid-teens. The other is entitled "A Hollywood Tour of Bela Lugosi," and is a rundown by writer Buddy Barnett of numerous places where Lugosi lived, worked or frequented during his life.

Title: Bela Lugosi: Then and Now!

Bela Lugosi: Then and Now!