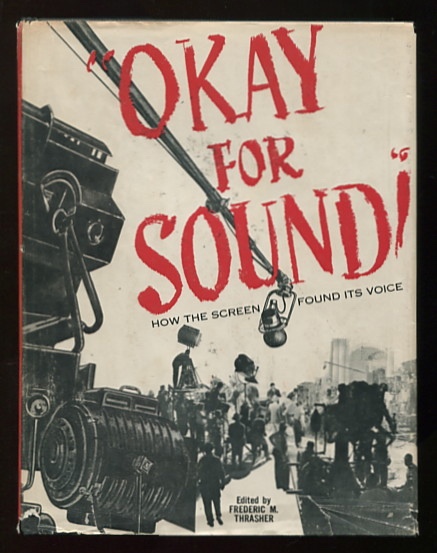 Okay for Sound: How the Screen Found Its Voice

[virtually no wear at all to the book; the jacket is lightly soiled, scuffed along the spine, with some paper loss surrounding the base of the spine and a short closed tear and associated creasing at the bottom right corner of the front panel]. (B&W photographs) A history of how sound recording was introduced to the movies, with heavy emphasis (and credit) given to the contributions of Warner Bros. -- not too surprisingly, since Warners was also the primary mover behind the movie industry's "20th Anniversary of Talking Pictures" campaign in 1946. Although there's no overt sponsorship statement in the book, quite a bit of it (especially Chapter 2, "Four Men with Faith") is explictly about the Warner brothers and the early development of their studio -- and a very high proportion of the photos in the book are related to WB films, although numerous other companies and individuals are also given credit for the photos in the "Picture Credits" at the end of the book. (The irony of this being that the sound system that Warners used to break the silence, so to speak -- the unwieldy sound-on-disk system known as Vitaphone -- was not the methodology that ultimately won the battle to become the industry standard.) Nevertheless, the book is a good popular history of the topic, and many of the behind-the-scenes photos are terrific.

Title: Okay for Sound: How the Screen Found Its Voice

Okay for Sound: How the Screen Found Its Voice