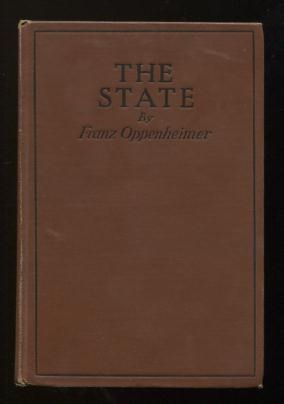 The State: Its History and Development Viewed Sociologically

(no dust jacket) [moderately worn but still solid book, slight bumping to several corners, dust-soiling and age-toning to edges of text block; one previous owner's signature at top of ffep, another previous owner's rubber-stamp on ffep and title page]. Originally published in Germany in 1908 (the first American edition was issued by Bobbs-Merrill in 1914), this is probably the most widely-read and influential work of this German sociologist. Per Wikipedia: "The work summarizes Oppenheimer's general theory on the origin, development and future transformation of the state. [It] was widely read and passionately discussed in the early 20th century. It was well received by—and influential on—as diverse an audience as Israeli halutzim, American and Slavic communitarians, West German Chancellor Ludwig Erhard, and anarcho-capitalists like Murray Rothbard." According to the author's preface, by 1922 other authorized translations had also appeared in French, Hungarian and Serbian, while there were also pirated editions available in several other languages, including Japanese, Russian, and Hebrew. The author prepared a somewhat revised edition, published in Germany in 1929.

Title: The State: Its History and Development Viewed Sociologically

The State: Its History and Development Viewed Sociologically