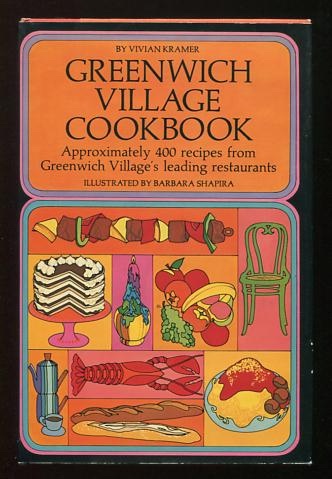 [nice clean book with just minimal wear to the extremities; the jacket is similarly nice, with only a bit of edgewear along flap foldovers and at top of spine; it's impossible to believe that this book ever spent much time in the vicinity of a kitchen]. (pen & ink drawings, endpaper maps) A compilation of about 400 recipes from more than 70 restaurants and coffeehouses then located in New York's Greenwich Village, "one of the few places in the world where restaurants representing a dozen or more nationalities exist within a few blocks of each other. Since many of these eateries are run by families -- sometimes the third generation in the business -j- these recipes are always something special." It would be interesting to know how many of the 70 are still in business fifty years later; the detailed endpaper maps would make it easy enough to figure that out, but I'll leave the task to some dedicated New Yorker. (I wonder how many Starbucks there are now in the Village?)