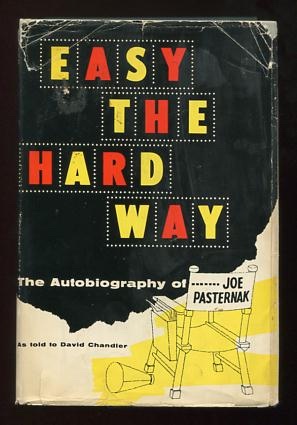 By: Pasternak, Joe, as told to David Chandler

[faint shelfwear only to book, light age-toning to edges of text block; jacket is somewhat worn, with paper loss at top of spine and top right corner of front panel, plus short tears and associated creasing at top corners of front panel, old price-sticker residue on front panel, miscellaneous other edgewear and light soiling]. (B&W photographs) INSCRIBED (with just the name of the inscribee and "from:") and SIGNED by the author on the ffep. Memoir by a slight late-comer to the "Jewish-immigrant-from-Eastern-Europe-becomes-big-shot Hollywood-producer" sweepstakes. Pasternak was born in Hungary in 1901, making him a generation or more younger than the first wave of early Hollywood moguls (Adolph Zukor, Louis B. Mayer, Lewis J. Selznick, et al.). He came to the U.S. as a teenager, developed a fascination with the movies, and worked his way up from busboy to assistant director at various studios during the 1920s. He made his first important mark as a producer in Europe from 1928 through the mid-1930s, first in Germany (to which he was sent by Universal Studios) and a bit later in his native Hungary, where he went after the Nazis came to power. Returning to Hollywood in 1936, he struck it lucky when he discovered the young singer/actress Deanna Durbin, with whom he eventually produced ten films for Universal. He later moved to MGM, remaining there for fourteen years (he departed the same year this book was published), then returned to Europe and remained active until the late 1960s. Signed by Author