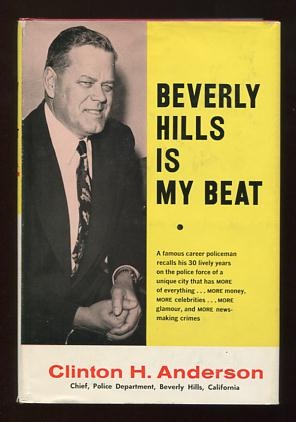 Beverly Hills is My Beat

[a very nice copy, with slight wear to spine extremities, otherwise clean and solid; the jacket has a few tiny nicks at spine ends, minor edgewear along top and bottom edges of rear panel, tiny closed tear and associated creasing at bottom of rear panel]. (B&W photographs) At the time this memoir was published, the author was a 30-year veteran of the Beverly Hills Police Department, and had been its Chief since 1942. (He would go on to become the longest-serving Chief of Police in the city's history, on the job until 1969.) As such, he definitely had the inside dope on all manner of misbehavior -- the Bugsy Siegel slaying, the Lana Turner-Johnny Stompanato case, the paternity suit against Charlie Chaplin, various stalkers of celebrities (Clara Bow, Jean Harlow, etc.), and numerous and sundry thieves, burglars, con men, juvenile delinquents, and characters such as "the mad bomber of Beverly Hills," and so on. But I think it's also safe to assume that since he was still the Chief in 1960, he could hardly have told the reading public ALL the facts he must have known; you don't keep a job like that, in a community like that, for 27 years without learning to exercise a lot of discretion.

Title: Beverly Hills is My Beat

Beverly Hills is My Beat