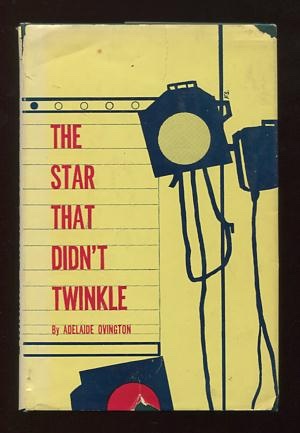 The Star That Didn't Twinkle [*SIGNED*]

[moderate wear to book at extremities, light age-browning to pages; jacket has a few small edge-tears and a handful of chips, especially around the edges of the rear panel]. (B&W photographs) INSCRIBED to friends and SIGNED by the author on the ffep. Uncommon vanity-press theatrical memoir, by a woman who trod the boards (under the name Adelaide Alexander) in the early 20th century. Her own career didn't amount to much -- in fact she readily admits (per the dust jacket copy) that "she remained in the wings, watching greater luminaries play their parts, [and] that her own role was unimportant" -- but her stage life (and her book) were enriched by her close association with Julia Marlowe, as a traveling companion, supporting player, and correspondent. Among the other theatrical luminaries she knew and worked with were Sybil Thorndike (who contributed a Foreword to the book), Richard Mansfield, and E.H. Sothern. Ms. Alexander abandoned the theatre in 1910 to marry a famous aviator of the day, Earle Ovington (whose accomplishments included flying the first official airmail flight in the U.S.), as she discusses in the book's penultimate chapter, "I Marry an Aviator and Start a New Life." (She also wrote a book about that experience, "An Aviator's Wife," published in 1920.) Signed by Author

The Star That Didn't Twinkle [*SIGNED*]