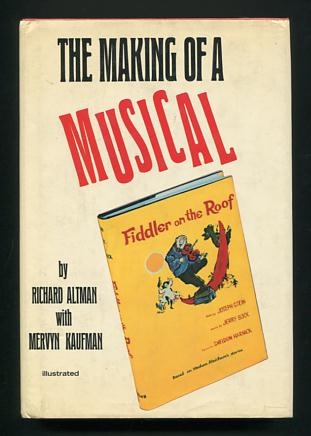 The Making of a Musical: Fiddler on the Roof [*SIGNED*]

By: Altman, Richard, with Mervyn Kaufman

(price-clipped) [nice clean book, with just minor handling wear to book and jacket, the latter downgraded from Near Fine only because of the price-clipping]. INSCRIBED ("To ______ -- / with all best wishes"), SIGNED and DATED by author Altman on the ffep. The authors "take readers behind the scenes to reveal, step by step, the many stages of production, and to illuminate the many complex personalities who participated in this astonishing worldwide theatrical success." Also covers the numerous touring companies of the show and the production of the 1971 film version, produced and directed by Norman Jewison.

Title: The Making of a Musical: Fiddler on the Roof [*SIGNED*]

The Making of a Musical: Fiddler on the Roof [*SIGNED*]