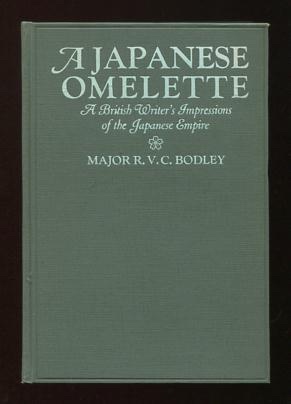 A Japanese Omelette: A British Writer's Impressions of the Japanese Empire [*SIGNED*]

(no dust jacket) [a nice clean book with minimal shelfwear, spine cloth slightly faded; PLEASE NOTE, however, that the title page has come loose from the binding]. (B&W photographic plates) INSCRIBED and SIGNED by the author on the ffep: "To Carmelita Wilson / primarily to prove to Carey / that the author once posessed / a uniform / appreciatively / Ronnie Bodley / Hollywood / Oct. 1935." The author had served in the British Army during World War I, and after the war, acting on the suggestion of T.E. Lawrence (of Arabia) that he "go live with the Arabs," he spent seven years roaming the Sahara with a Bedouin tribe. Following that he traveled to the Far East, primarily in China and Japan, and wrote a number of books based on his experiences and observations in the region; this volume was an account of the nine months he spent teaching English at Keio University in Japan. Soon thereafter he moved to the U.S. and dabbled a bit in screenwriting, working on a scenario for Charlie Chaplin (which was never produced) and making some uncredited contributions to the development of the script for the M-G-M film A YANK AT OXFORD. The inscription in this copy documents at least one of his Hollywood connections: the inscribee was the wife of M-G-M producer/writer Carey Wilson, and had herself been an actress under the name Carmelita Geraghty. Laid in to this copy is a publisher's flyer for one of the other books that Bodley wrote based on his experiences in Japan, "The Drama of the Pacific," in which he posited (incorrectly) that Japan had not taken any steps to beef up its military presence in the North Pacific. Signed by Author

Title: A Japanese Omelette: A British Writer's Impressions of the Japanese Empire [*SIGNED*]

A Japanese Omelette: A British Writer's Impressions of the Japanese Empire [*SIGNED*]