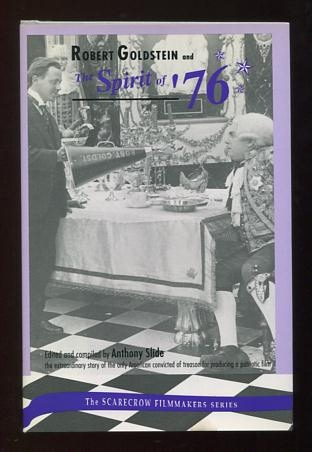 [beautiful, as-new book, with no discernible wear to either book or jacket]. (Filmmakers, no. 34) Series (B&W photographs) The remarkable and ultimately tragic story of Robert Goldstein, the first and only American citizen who was ever imprisoned for the crime of producing a film -- a patriotic film, at that, an historical drama set during the American Revolution, in which (surprise!) the British were depicted as the bad guys. Unfortunately for Mr. Goldstein, his epic (the creation of which had been inspired by D.W. Griffith's THE BIRTH OF A NATION, for which his costume-supply business had furnished the wardrobe) appeared just after America jumped into World War I, aligning us with (you guessed it) the British. The film, therefore, got denounced as "anti-British propaganda," and the government did what hysterical governments tend to do in wartime: they arrested Goldstein and charged him with sedition under the Espionage Act -- which wasn't even passed into law until a month after the film's premiere! (And talk about having the deck stacked against you: it didn't help Goldstein's case that he was of German-Jewish ancestry, which in turn led to false rumors that he was a German spy.) The film was seized and Goldstein was convicted and sentenced to ten years in prison (later commuted to three); upon his release, he basically spent the rest of his life seeking vindication for his "persecution and prejudice against [him, and the] wanton injustice" to which he had been subjected. In his desperation, he submitted a 92-page manuscript detailing his plight (ostensibly written by an associate) to the Academy of Motion Picture Arts and Sciences on May 21, 1927 -- a mere ten days after the organization's official kickoff banquet -- appealing for its help in righting the wrongs done against him. (In fairness to the Academy, there was very little it could have done, especially when it was still in start-up mode.) This manuscript lay unnoticed in the Academy's files until it was unearthed (by yours truly, if you must know) and put into the hands of historian/editor Anthony Slide, who did an excellent job in preparing it for publication (in its entirety) -- not only providing a thorough introduction, but also assembling a number of contemporary press accounts and government documents, to present it in its proper context.

Title: Robert Goldstein and The Spirit of '76