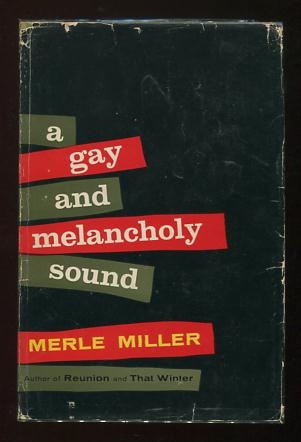 A Gay and Melancholy Sound

[solid copy, light shelfwear, a touch of fraying to cloth at top of spine, light bumping to bottom rear corner, minor soiling to bottom of text block; jacket heavily edgeworn, various tiny tears/nicks/creasing along top edge (especially to the rear panel)]. Novel about an "ex-prodigy, World War II veteran, and theatrical producer [who is] accustomed to triumphs practically everywhere," but is possessed with "a sardonic humor, an urgent question -- Is modern life worth the living? -- and the ability to see both himself and others in a pure, white light." The author, a then-closeted gay man who wouldn't come out for another decade (via a 1971 article in The New York Times Magazine), wrote numerous works of both fiction and non-fiction; the year after this book appeared, he was contracted to do a series of interviews for a proposed documentary TV series about former President Harry Truman; although the show was never produced, the interviews were ultimately incorporated into what is probably Miller's best-known book, "Plain Speaking: An Oral Biography of Harry S. Truman." Roger Austen, in "Playing the Game," describes the novel as semi-autobiographical and as containing "a minor gay motif," but also scores it as being "more melancholy than gay." (It's worth remembering that "gay," in the early 1960s, wasn't yet a widely-used appellation for a homosexual -- but at the same time, it's doubtful that its deployment in the book's title was accidental.)

Title: A Gay and Melancholy Sound

A Gay and Melancholy Sound