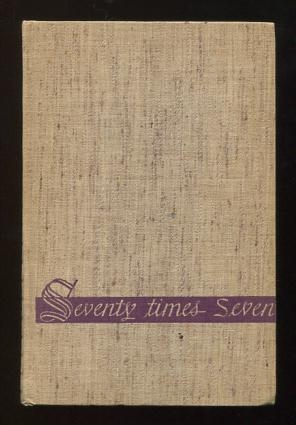 (no dust jacket) [lightly shelfworn, spine very slightly turned, a couple of tiny rips and a touch of fraying at top of spine, a bit of dust-soiling to top of text block; old inscription (probably non-authorial) blotted out on ffep (somebody went to a lot of trouble)]. Sanford's third novel (the second under this, his permanent pseudonym). Set in rural New York, it's a dramatic tale (with several interspersed passages of blank verse) about the mortal conflict between two men. Kirkus Reviews called it "an unusual book, with some pieces of brilliant writing, but also with some of the most bestial and flamboyantly crude passages ever encountered on the printed page, exceeding Celine and Faulkner in depravity and language." Apparently unable to grapple with its larger themes, the publication devoted its brief review to a couple of major spoilers, then circled back to denounce it "a ruthless, repellent book," while at the same time allowing that it was "written with the power that such subject matter occasionally releases." The Los Angeles Times reviewer, although mis-describing it as a "first novel," was a bit more perceptive, and gave Sanford a few points for ambition, noting that "like many young novelists, he is filled with ideas and trires to get the whole of America into a brief, fast book of less than 200 pages, and those pages terse."