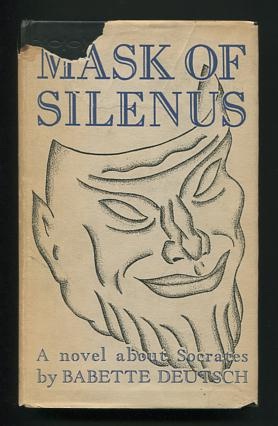 Mask of Silenus; a novel about Socrates

[light shelfwear to book, age-toning and light spotting to top edge of text block, front hinge starting; jacket has a large-ish chip at upper left corner of front panel (extending a bit onto the top of the spine) and a closed tear that extends into the upper middle section of the jacket, also a little paper loss at base of spine (which is also a bit age-browned); tiny chip and diagonal closed tear at top of rear panel]. "Though [the author] has of necessity leaned heavily upon the Dialogues and has been as faithful as possible to the historic facts, her interest is that of the novelist rather than the historian. She breathes life into the marble of antiquity [in depicting] the story of an ugly, witty, sparkling, lovable old man who could not hold his tongue, a fisher of souls who stood for freedom of speech and conscience, and whose courage speaks to us today across the centuries in the pages of this book." The New York Times critic opined: "It is a noble story, this of the life and death of Socrates; and it is the supreme merit of this little work that Miss Deutsch both realizes in herself and makes realizable to her reader its extreme nobility and spirituality." The author (1895-1982), a poet and novelist in her early career, later gained prominence as an editor, translator, and critic; this was her third published novel.

Title: Mask of Silenus; a novel about Socrates

Mask of Silenus; a novel about Socrates