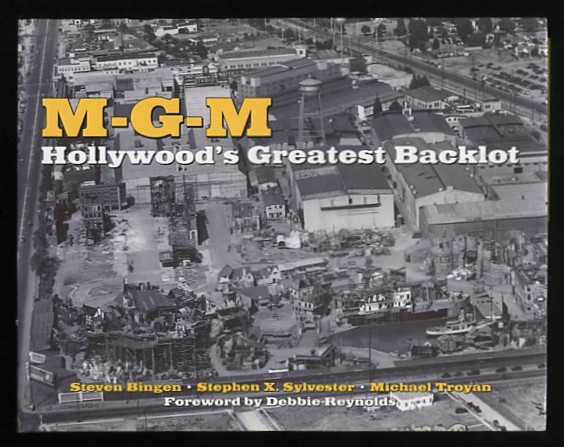 1595800557 [nice copy, only blemish to book is a faint stain on the bottom edge of the text block (the sort of thing you'd never have noticed if I hadn't pointed it out); the jacket shows just a touch of handling wear]. (B&W photographs, facsimiles) A different sort of movie-studio history, focusing not on the corporate history or even the films as such, but specifically "an illustrated history of the soundstages and outdoor sets where Metro-Goldwyn-Mayer produced many of the world's most famous films." A delight to browse through, the book makes the point vividly that the old Hollywood studios -- and M-G-M was the grandest of them all -- were virtually self-contained cities. It contains hundreds of photos of the major (and minor) buildings on the lot, shots of the standing sets (both in use and, occasionally, in forlorn and even derelict condition), interiors of departments, maps of the lot, etc. -- and while there are plenty of "production" shots (and glimpses of numerous movie stars), there's nary a "movie still" to be found. The emphasis throughout is very much on the physical plant, and on any given page you're much more likely to find yourself looking at a shot of the inside of the film laboratory, or the barber shop/newsstand, than of actors or actresses at work. Especially interesting is the appendix, "Films Shot on the Backlot," which lists hundred of films, categorized by the sets or streets utilized in their production -- "Small Town Railroad Depot," 47 productions; "Copperfield Street," 10 productions; "Esther Williams Pool," 40 productions; etc. Honestly, this book is SO much more interesting than those coffee-table studio histories ("The MGM Story," "The Paramount Story," etc.), which mostly consist of a long paragraph about each film and a (usually) tiny and uninteresting still. ***NOTE: Additional shipping charges for this heavy book may apply for non-U.S. customers, or for Priority Mail shipping within the U.S.; if this causes you concern, please inquire before placing your order.***