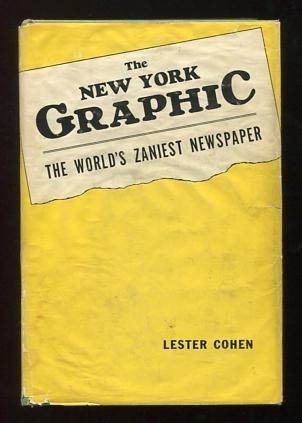 [book is moderately shelfworn, light staining along top edge of front cover, a bit of foxing/spotting to top of text block; jacket is wrinkled and somewhat grubby-looking (it had apparently gotten wet at some point), with a bit of paper loss at spine extremities]. (B&W photographs, facsimiles) The behind-the-scenes story of the salacious and sensationalistic New York tabloid of the 1920s, which took yellow journalism to new highs (i.e. lows), yet also nurtured some major journalistic (and other) talents, among them Walter Winchell, Ed Sullivan, and future film directors Samuel Fuller and John Huston. Founded by entrepreneur publisher and health nut Bernarr Macfadden, it was published from 1924 to 1932. Author Cohen was the paper's contest editor, and his book is as much a personal reminiscence as it is a formal history.