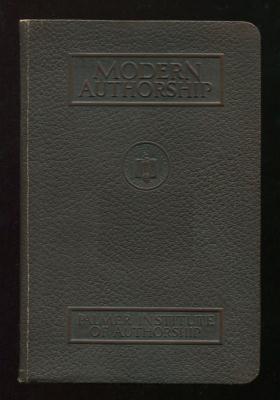 (flexible brown leatherette textured covers; no dust jacket, as issued) [moderate wear to extremities, clean inside and out]. (B&W photographs) Part of "a series of texts prepared as part of the Palmer Course and Service in Creative Writing," this volume prints five silent feature-film scenarios. The first, JUDGMENT OF THE STORM (produced at the Thomas H. Ince Studios by the affiliated Palmer Photoplay Corporation), is presented most comprehensively, including both detailed synopsis (by Ethel Styles Middleton) a "scene continuity" (the full script, shot-by-shot), and an "illustrated continuity" (with frame blow-ups illustrating selected scenes from the film); the film was directed by Del Andrews and starred Lloyd Hughes. The other scenarios (presented in detailed synopsis form only, each about 18-25 pages long) are: GARRISON'S FINISH, by W.B.M. Ferguson (Jack Pickford Productions, 1923); THE DANGEROUS AGE, by Frances Irene Reele (Louis B. Mayer Productions, 1922) ; THE RULING PASSION, by Earl Derr Biggers (United Artists, 1922); and DOUBLE SPEED (Paramount, 1920), by J. Stewart Woodhouse. For each film, the cast of characters is also given.