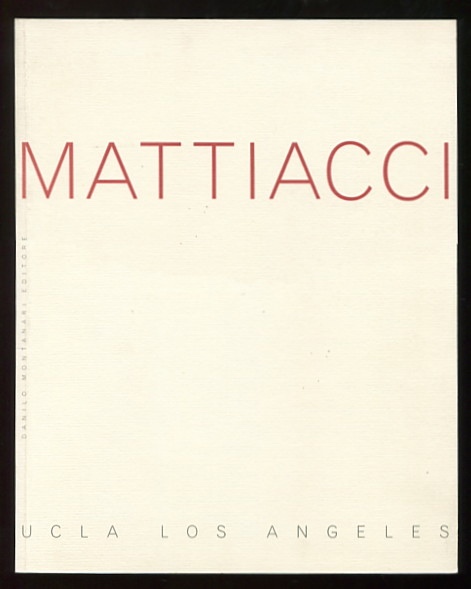 [faint handling wear only]. (B&W and color photographs) SIGNED(?) and INSCRIBED(?) on the title page -- probably by the artist (see below), although quite honestly it's pretty much an illegible scrawl. The limitation page states: "Five hundreds [sic] copies of this book were printed ... on the occasion of the unveiling of Eliseo Mattiacci's Occhio del cielo; the 26th of May 2005." The book contains several brief critical texts (all in both Italian and English; by Massimo Ciavolella, Luigi Ballerini, Paolo Fabbri, and Francis M. Naumann), accompanied by photographs of sculptor Eliseo Mattiacci (1940-2019) creating his monumental work "Occhio del cielo" ("Eye of the Sky"), a homage to Galileo. Composed of three bands of Cor-Ten steel and weighing more than a ton, its installation in UCLA's Franklin D. Murphy Sculpture Garden involved a hydraulic crane and a subterranean concrete pad. The piece was a gift from the artist to the University, and (as reported in the Los Angeles Times) he traveled from Italy to supervise its installation, the first permanent installation of his work in the U.S. -- hence my assumption that the "inscription/signature" on the title page, such as it is, was executed by him. (The Times article also confirmed that Mattiacci didn't speak English, so it's probable that the inscription is in unreadable Italian rather than unreadable English -- although one could reasonably argue that if it's unreadable, it doesn't really matter what language it's in.)