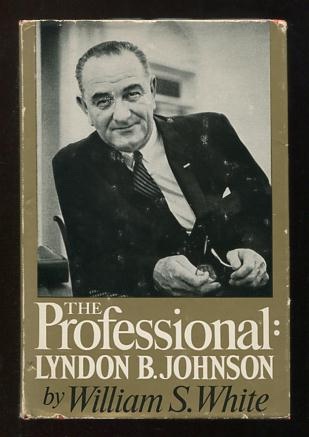 The Professional: Lyndon B. Johnson [*SIGNED* (autopen) by Johnson]

[light shelfwear to book, spine slightly turned; jacket moderately edgeworn with a bit of scuffing, a number of tiny tears and shallow chipping along top and bottom edges of rear panel]. SIGNED (autopen) by the 36th President on the half-title page: "With best wishes, / Lyndon B. Johnson." An uncritical-bordering-on-hagiographic biography of LBJ, by a newspaper columnist and fellow Texan who had been a close personal friend since the 1930s. How uncritical was it?: many copies of the 4th printing were personally autographed by Johnson and sent to Democratic delegates in advance of the 1964 Party convention in Atlantic City -- at which LBJ was nominated on a voice-vote, with no serious challengers. (Just to NOTE, again, and be clear: this copy was signed with an autopen, so it was presumably *not* one of the sent-to-delegates copies mentioned above.) Signed by Biographee

Title: The Professional: Lyndon B. Johnson [*SIGNED* (autopen) by Johnson]

The Professional: Lyndon B. Johnson [*SIGNED* (autopen) by Johnson]