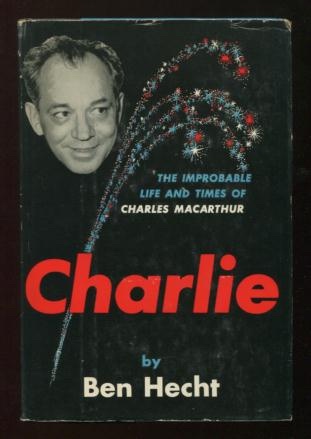 Charlie; the improbable life and times of Charles MacArthur [*SIGNED*]

(price-clipped) [light wear to book's extremities, top corners very slightly bumped; jacket lightly edgeworn, a couple of tiny nicks at top edge of front panel, rubbing and minor wrinkling at spine ends]. (B&W photographs) INSCRIBED on the ffep "To Olive Peterson," with a rough sketch of a dog smoking a cigarette, below which the author has SIGNED "her friend / Ben Hecht." Hecht's freewheeling, anecdotal, affectionate memoir of his longtime friend and collaborator -- co-author with him of the plays "The Front Page" and "Twentieth Century" (among others) -- is one of the great showbiz biographies, a perfect melding of subject and chronicler. MacArthur was a celebrity of a kind we don't have any more, "a Roman candle of a man who lit up the skies of the twenties and thirties," as a journalist, playwright, screenwriter, and raconteur, whose "antics in movie land kept the stars and geniuses of that sand dune agog for decades" [that blurb HAS to have been written by Hecht himself] and who "was at home among the celebrities of Europe -- from the Grand Dukes to the Left Bank exotics -- as he [had] been among the gangsters of Chicago." Among MacArthur's notable movie credits (some solo, some in collaboration with Hecht and others) included WUTHERING HEIGHTS, RASPUTIN AND THE EMPRESS, TOPAZE, THE SCOUNDREL, CRIME WITHOUT PASSION and GUNGA DIN. Because he and Hecht were so closely associated for so long (dating back to their newspaper days in Chicago, where they met in the early 1920s), the book makes a nice adjunct to Hecht's own memoir, "A Child of the Century," which had been published only a few years earlier. Actually, given the fact that "Charlie" appeared barely a year after MacArthur's death in April 1956, it almost reads like a eulogy (albeit a very high-spirited one) -- or perhaps more accurately, a book that Hecht felt obligated to write, not just because he knew no one could tell it as vividly as he could, but also, as he states in the opening line of the book: "I have in my keeping the memory of a unique man." The book's preface is by Helen Hayes, MacArthur's wife since 1928, who briefly but movingly recounts her own struggle to explain the essence of her husband's personality, finally expressing her amazement "that for all our possessiveness, our pursuit, our searching, Charlie eluded us to the end. He remained his secret self." She praises Hecht, however: "Brave, wise Ben, to hold fast to his own Charlie -- his Roman candle of a man." The present copy bears a better-than-usually-seen example of the easily-worn dust jacket, and signed copies are uncommon. Signed by Author

Charlie; the improbable life and times of Charles MacArthur [*SIGNED*]