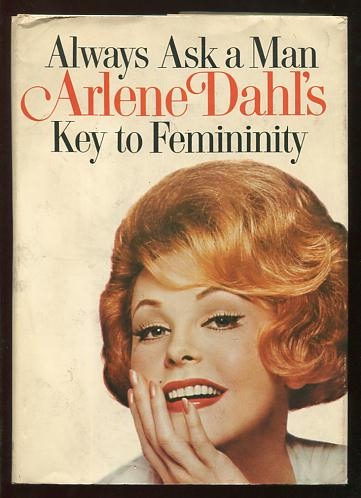 [minor shelfwear only, a touch of soiling to bottom edge of (white) boards; jacket shows a bit of smudging and light soiling, but still very presentable]. (pen and ink drawings) Being true to her concept in researching this all-purpose how-to book of femininitization technques, the author, blurbed as an "internationally-known film star and one of the world's loveliest women," claimed to have "interviewed hundreds of discerning males on the subject of women and beauty -- stars of motion pictures, Broadway and television, statesmen, noblemen, businessmen, and members of international society." (Those quoted on the rear jacket panel include Kirk Douglas, Pat Boone, Montgomery Clift, and Richard Burton.) "Each described his list of qualifications for the ideal woman. They may run the gamut in type from the intellectual to the athletic, but -- without exception -- every man put one quality above all others in describing his ideal. That one essential attribute which all men seek and admire in a woman is FEMININITY." (Quick: name a single movie that the "internationally-famed motion picture, television and stage star" Arlene Dahl appeared in. Thought so. Which is not to say she wasn't lovely. And feminine!)