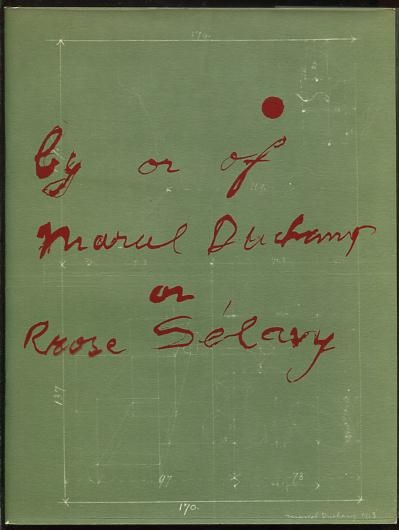 [beautiful condition, with just a few traces of wear at the corners; in the original clear acetate dust jacket, similarly nice]. A beautiful, near-pristine copy of the original catalogue for one of the most notable West Coast art exhibitions of its day, the first U.S. retrospective of the work of French-born artist Marcel Duchamp, presented in 1963 by the Pasadena Art Museum under its legendary then-acting director Walter Hopps. Duchamp, despite his enormous and continuing influence on the development of what came to be called conceptual art, had "ceased to perform as an artist" circa 1923, and had subsequently devoted himself largely to writing and to studying and playing chess. His work was "rediscovered" in the late 1950s by the new generation of American abstract artists, among them Jasper Johns, Robert Rauschenberg and others, including some of the artists that Hopps had championed, first at his Ferus Gallery in L.A. (co-founded with Ed Kienholz in 1957) and then at Pasadena. Duchamp, then in his 70s, had never been the subject of a comprehensive retrospective, and proved to be an enthusiastic participant in the enterprise, which ultimately gathered 114 pieces from two dozen collectors and institutions, with several items loaned by Duchamp himself. Duchamp attended the show's invitational preview on October 7 (with Ed Ruscha, Billy Al Bengston, and Andy Warhol also in the room), which was summed up by an L.A. Times headline: "They Came, They Saw -- Duchamp Conquered." (The paper's society editor, who covered the event, failed to note the presence of Warhol et al., but she did observe that "actor Dennis Hopper, an able amateur photographer, was there with his camera." Their art critic, however, was properly appreciative of the show itself, calling it "an event that will focus international attention on this area.") The catalogue, of which just 2,000 copies were printed, includes: a chronology of Duchamp's life; reproductions or photographs of 37 of the 114 items featured in the exhibition (three of which are tipped-on color plates, another a color reproduction); and facsimile reproductions of the curator's index cards for every item in the exhibition, annotated to show the lenders of each piece. Very scarce, especially in such nice condition.