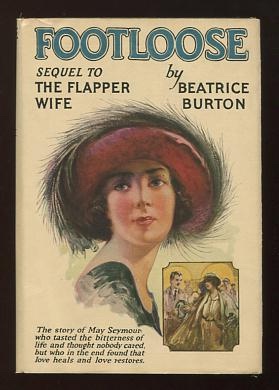 Footloose; sequel to "The Flapper Wife"

[book is in decent used condition, but has some serious deterioration to the cloth around the bottom front hinge; the jacket (which originated on a different copy of the book) is bright and clean, almost like new except for a touch of wear at the top of the spine]. "Readers of 'The Flapper Wife' will remember May Seymour as the reckless, pleasure-loving young married woman who brought Gloria's little home to the brink of ruin, as the butterfly who drove her husband to suicide. In [this book] we find her a disillusioned widow, her heart filled with bitterness against her old home community and against the world. She takes the money which has been left after her home is sold and decides to have a wild, desperate fling at a wealthy pleasure resort on the Atlantic coast." (So why didn't they call it "The Flapper Widow"?) Like much of author Burton's work, this was a Grosset & Dunlap original, not a reprint. The author, whose full name was Beatrice Burton Morgan, had a handful of acting and writing credits in the silent film era; one of the latter was a story credit for a 1926 film called FOOTLOOSE WIDOWS, although an account of the movie's plotline (in which the heroine is only *pretending* to be a rich widow, in service of some farcical comedy) would seem to indicate that it was not based directly on this book. [NOTE that the book has sustained a bit of damage at the lower front hinge; also, the dust jacket has been supplied from another source.]

Footloose; sequel to "The Flapper Wife"