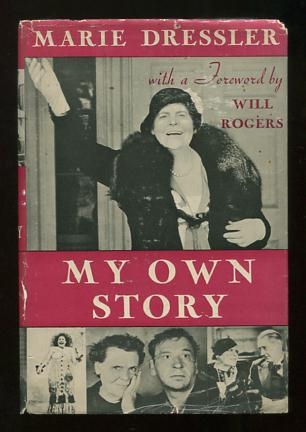 By: Dressler, Marie, as told to Mildred Harrington

(price-clipped) [solid clean book, minor wear to top and bottom edges, gift inscription (non-authorial) dated 1934 on ffep; jacket moderately edgeworn, a few small closed tears, some wrinkling/creasing at top and bottom corners of rear panel and also bottom of front panel, a bit of scuffing here and there]. (B&W photographs) Posthumously-published autobiography by the veteran actress who had had great success on the stage but somewhat less in the movies, despite her auspicious debut in TILLIE'S PUNCTURED ROMANCE (1914). More or less retired from show business by the mid-1920s, she was lured back by an M-G-M contract just before the talkies hit, and once movie audiences got an earful of her voice (a perfect match with her somewhat craggy appearance), they couldn't get enough of her. She won a Best Actress Academy Award for MIN AND BILL (1930) and from then until her death in July 1934 she was a top box-office attraction. According to an introductory note, Dressler "saw and approved the greater part of the manuscript but was too ill either to read or give her approval of the final proofs." (An earlier autobiography, "The Life Story of an Ugly Duckling," had appeared in 1924.) The Foreword to this volume was provided by Will Rogers, who lauded her as "the real queen of our movies [with] a marvelous personality and a great heart."

Title: My Own Story