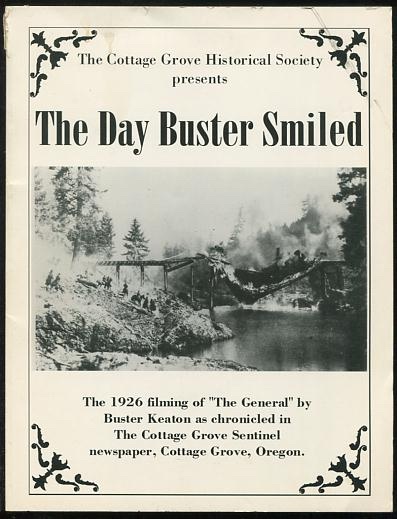 The Day Buster Smiled; the 1926 filming of 'The General' by Buster Keaton as chronicled in The Cottage Grove Sentinel newspaper, Cottage Grove, Oregon

[minimal wear, but with an approximate 1-inch split at the top of the spine, resulting in the top inch or so of the spine covering being somewhat loose (like a little flap); there is also about a 2-inch diagonal scrape line across the top right corner of the front cover]. (B&W photographs) A collection of contemporary local-newspaper accounts of the on-location filming of perhaps the greatest (and without question the most spectacularly-mounted) comedy of the silent film era, Buster Keaton's THE GENERAL. The making of the film has been extensively chronicled by various film historians, but these reprinted articles charmingly convey "the enthusiasm, interest, and pride of a small town" at having been chosen as the primary location for such an auspicious production. It was, in fact, a pretty big deal: with the full backing of United Artists president Joseph M. Schenck (who also happened to be Keaton's brother-in-law), the filmmakers took up residence in the town for the better part of four months, and made extensive use of its streets (building Civil War-era period-appropriate buildings and sets as necessary), the surrounding countryside, and the local population (as extras in several battle scenes). Reprinted in this volume is apparently every article related to the film that appeared in the local newspaper from the very beginning ("Buster Keaton Picture May Be Taken Here," May 3, 1926) to its premiere showings in Portland and other Oregon cities, eventually including Cottage Grove itself, in January 1927. Some of the pieces are extensive -- such as the detailed report of the filming of the famous scene in which a locomotive plunges to the bottom of a ravine while attempting to cross a burning trestle -- while others are interesting but trivial, such as an account of some locals' alarm at seeing mobs of uniformed "Union soldiers" hanging around the streets one day, waiting for their call to location. Illustrating the book are a number of photographs (unfortunately not well-reproduced) taken during the production, as well as a few "then and now" shots of the town (not directly related to the filming). The last few pages of the book contain brief biographical or character sketches of a couple dozen members of the film's cast and crew, not sourced but apparently also from the Sentinel, and based on some combination of personal interviews and publicity materials. Printing/edition note: A label on the inside front cover indicates that this copy was #338 of a limited edition of 500; how that factors in to this also being a stated "2nd Printing," I couldn't say.

Title: The Day Buster Smiled; the 1926 filming of 'The General' by Buster Keaton as chronicled in The Cottage Grove Sentinel newspaper, Cottage Grove, Oregon

The Day Buster Smiled; the 1926 filming of 'The General' by Buster Keaton as chronicled in The Cottage Grove Sentinel newspaper, Cottage Grove, Oregon