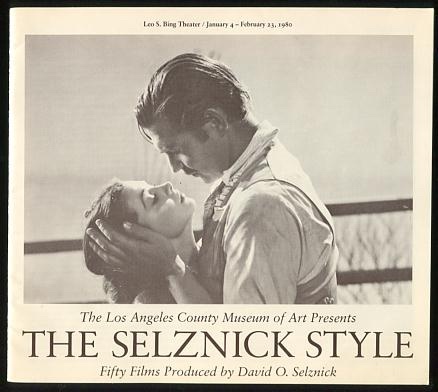 [nice clean copy with minimal discernible wear, just a handful of tiny horizontal stress lines adjacent to spine, slight bump to base of spine causing short diagonal wrinkle at bottom right corner of rear cover]. (B&W photographs) 24-page program book for retrospective series of films produced by Selznick, both as an independent and during his various early-career stints at Paramount, RKO and MGM. Includes a 4-page introduction by LACMA Film Department curator Ronald Haver (a Selznick devotee who the following year would publish his magnum opus on the producer and his films, "David O. Selznick's Hollywood"), and credits of the fifty films in the series, including GONE WITH THE WIND, REBECCA, NOTHING SACRED, KING KONG, DINNER AT EIGHT, DAVID COPPERFIELD, A STAR IS BORN, DUEL IN THE SUN and many others.