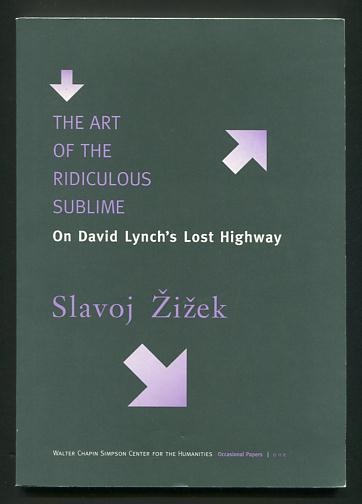 The Art of the Ridiculous Sublime: On David Lynch's Lost Highway

[the teensiest bit of edgewear to covers, otherwise clean and as-new]. (Occasional Papers, one) Series Trade PB An essay on David Lynch's 1997 film LOST HIGHWAY by the Slovenian academic who's described in this book's introduction as "one of the great minds of our time," lauded for "his extraordinary fusion of Lacanian psychoanalytic theory, continental philosophy (in particular his anti-essentialist reading of Hegel), and Marxist political theory." His essay here "offers a flamboyant parade of topics that reaches far beyond the scope of Lynch's movie, delving into film theory, ethics, politics, and cyberspace."

Title: The Art of the Ridiculous Sublime: On David Lynch's Lost Highway

Publisher: Seattle, The Walter Chapin Center for the Humanities / University of Washington: (c.2000)

The Art of the Ridiculous Sublime: On David Lynch's Lost Highway