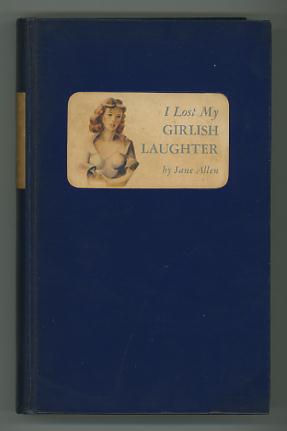 (no dust jacket) [nice copy, spine a little turned, extremely light dampstaining on top edge (with occasional very slight bleeding onto top edges of some pages); paste-on illustrated label on front cover slightly rubbed/yellowed but still attractive, paste-on spine label faded and nearly unreadable]. A classic of Hollywood quasi-fiction, written pseudonymously by Jane Shore and Silvia Schulman; the latter had been personal secretary to famed producer David O. Selznick, but had left his employment to marry screenwriter Ring Lardner Jr. (they were later divorced). Selznick, according to bibliographer Anthony Slide, was "outraged" by the book (in which he is thinly disguised as "Sidney Brand"), was convinced that Lardner himself had written it (which Lardner always denied), and even went so far as to attempt (unsuccessfully) to prevent Orson Welles from presenting a radio adaptation. The book, writes Mr. Slide, "is a delight. The author captures an innocent's enthusiasm at working in Hollywood, and the day-to-day activities of a studio are well documented from the point of view of a secretary who must not only deal with her producer-boss's business life but also with his personal one." The narrative is rather cleverly composed of letters to friends, inter- office memos, telegrams, trade paper items, and entries "From a Secretary' s Private Journal." Quite a decent copy of an increasingly hard-to-find book; a "Hollywood 100" title, included in "100 Books on Hollywood & the Movies." [NOTE: This copy comes with a color photocopy of the book's original dust jacket, which is a bit of a rarity.]

Title: I Lost My Girlish Laughter