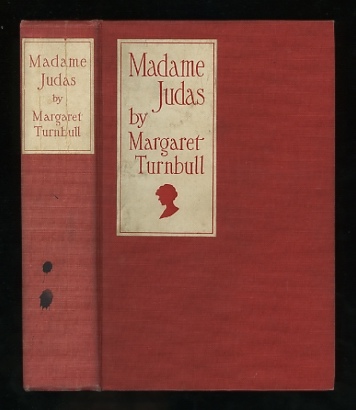 (no dust jacket) [moderate external wear, a little soiling to paper label on front cover, spine turned, a couple of ink spots on spine, slight fading to spine cloth, paper spine label cracked/faded; small, attractive vintage bookplate on front pastedown ("Ex Libris / 'Sledmere,' Dorset, Vermont")] Mystery novel, by a former motion picture scenarist, that introduced the character of Juliet Jackson, a newpaper reporter-cum-detective (known as "the Female Ferret"). Born in Glasgow, Scotland, she came to America with her family at the age of two and eventually settled in New Hope (Bucks County). From 1905 to 1915 she wrote mostly plays and novels, but once she entered the movie business she gave it her all, and between 1915 and 1924 amassed an impressive roster of film writing credits (working both in America and England), before quitting the biz and returning exclusively to fiction writing. (Interestingly, her very first film credit (in 1914) and her very last (in 1924) were both adaptations of a play called "Classmates," which she co-authored with William de Mille in 1907.) She turned out at least one more novel featuring Juliet Jackson, "Rogues' March" (1928), which had a marginal Hollywood angle (J.J. investigates the murder of a film star), and a half-dozen or so other novels prior to her death in 1942.