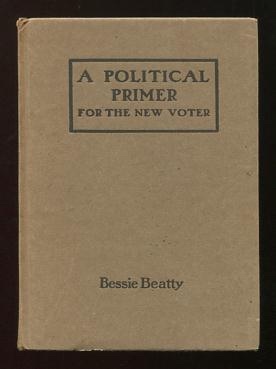 A Political Primer for the New Voter

(paper-covered boards/no dust jacket, probably as issued) [modest wear at spine ends, shelfwear to bottom edges of covers (some exposure of boards), discoloration to endpapers (possibly from a laid-in clipping, no longer present)]. A handy little guide for the "new voter," which in this context meant primarily the "new woman voter," as the book was prepared and published shortly after the California Legislature had passed a bill giving the state's women the franchise in October of 1911. One William Kent states in his introduction: "As is natural in a book written by a woman, there is special but not undue emphasis placed upon the political and legal status of women." Of particular interest are the discussion of the "Woman's Eight-Hour Law," in Chapter VIII, and Chapter IX, entitled "The Legal Status of Women." The author, a native of Los Angeles, was a freelance journalist and columnist, and was part of a group of journalists (including John Reed and Louise Bryant) that visited Russia in 1917, where she intereviewed Trotsky and members of Women's Battalion; she published a book about the trip, "The Red Heart of Russia," in 1918. Her political activism also included membership in Heterodoxy, a Greenwich Village-based feminist debating group that provided a forum for more radical ideas than could be comfortably accommodated in the suffrage and women's club movements of the day. The author dedicates the book to her mother, "the woman who represents to me the best in womanhood [and] who was my comrade in the California woman's struggle for the ballot."

Title: A Political Primer for the New Voter

A Political Primer for the New Voter