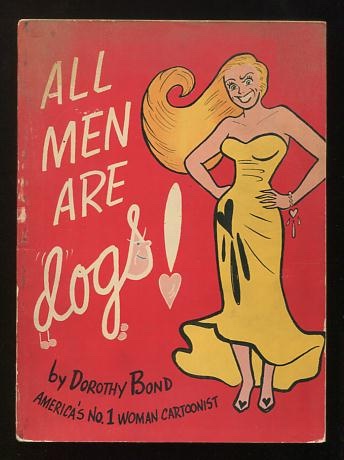 All Men Are Dogs!

[covers a bit edgeworn, mostly along spine, light fading/rubbing to upper sections of front cover]. Trade PB (cartoon drawings) Substitute "Hounds" (or better yet, "Pigs") in the title, and you'd be closer to the mark: pretty much the entire book is devoted to the myriad ways in which the "working girls" of the world can expect to be sexually harassed by, well, nearly every single man they allow to get anywhere near them -- at work, at home, or in public. Pitched as "full of sharp wit and good humor," the book definitely has plenty of those, but on another level it's like a horror show in its casual acceptance that that's just the way things are, honey, so you'd better learn to deal with it. Was Dorothy Bond really "America's No. 1 Woman Cartoonist," as the cover blurb would have it, and the "Champion of the Working Girl" (ditto), attested to by her "thousands of fan letters"? On the first claim, one can only observe that in 1950 there wasn't a hell of a lot of competition for that title (although quite a few votes might go to Helen Hokinson). On the second claim, that appellation was the subtitle of a newspaper comic strip she produced for a time in the late 1940s entitled "Chlorine," about an office secretary, which in turn was an offshoot of an earlier strip called "The Ladies." Despite the somewhat depressing nature of the theme (to modern eyes, anyway), it has to be noted that most of the author's sarcastic barbs are aimed straight at the men she depicts -- and they hit their mark..

Title: All Men Are Dogs!

All Men Are Dogs!