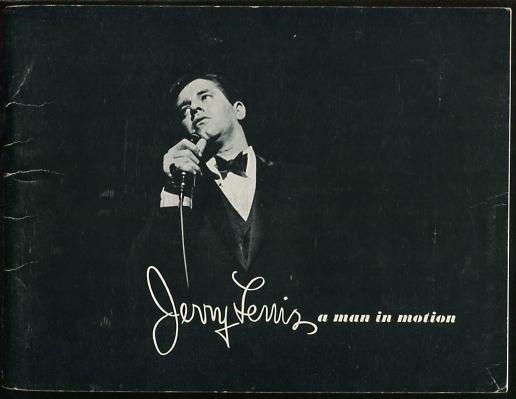 Jerry Lewis; a man in motion

[moderate wear at corners, a few horizontal stress lines adjacent to spine]. (B&W photographs, graphics) A remarkable piece of self-sycophancy, uncredited (except for some of the individual pieces, as noted) but pretty obviously issued with the full cooperation of Lewis himself. Dozens of photographs showcase Jerry "the man," "the comedian," "the clown," "the maestro," "the sportsman," "the director," "the man of many faces!", etc. -- Jerry behind the scenes, on stage, on television, on tour, with his family, and on and on. The interspersed text is equally fawning: the introduction by Bill Richmond tells us that we "are about to observe the life and times of a man whose interests include all things and ideas, whose compassion extends to every living soul, whose birthright is to entertain the world"; an admiring piece about Jerry's talents as a director, by L.A. Times film critic Kevin Thomas; a reprint of a NYT story by Hollis Alpert, about how much Lewis was adored in France. And of course, on the inside back cover is a pitch for donations to Lewis's longtime pet charity, the Muscular Dystrophy Association. There's publicity -- there's self-promotion -- and then there's this (which honestly, even if you admire a lot of Lewis's work -- as I do! -- kinda makes you a little nauseous).

Jerry Lewis; a man in motion