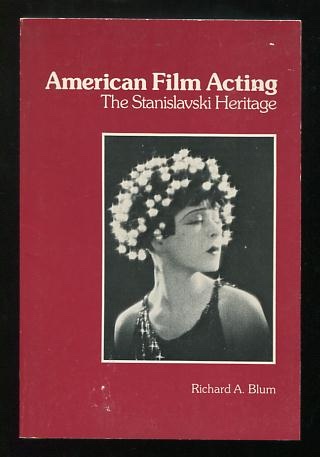 By: Blum, Richard A.

[a couple of tiny scuff marks on front cover, otherwise virtually as new] (Studies in Cinema, No. 28) Series Trade PB (B&W photographs) "In this book -- the first to examine the impact of [Constantin] Stanislavski's system on American film acting -- [the author] follows the development of acting theory and practice in America from the New York pictorial stage of the 1920s to the Hollywood sound stage of the 1980s. He traces the work of Richard Boleslavsky and Maria Ouspenskaya at the American Lab Theatre; Lee Strasberg and the Group Theatre of the 1930s; Elia Kazan and the Actor's Studio in the '40s; such interpreters as [Marlon] Brando and [James] Dean in the '50s and '60s; and the Actor's Studio West of the '70s and '80s. [He] shows how distinguished film artists of today are direct descendants of the Stanislavski heritage."