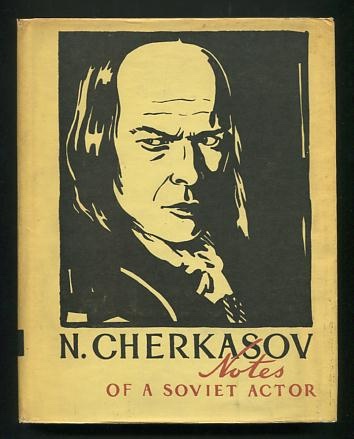 By: Cherkasov, N[ikolay] (translated from the Russian by G. Ivanov-Mumjiev and S. Rosenberg)

[book is very nice, with only light handling wear; jacket moderately soiled, spine a little darkened]. (B&W photographs) Memoir of the noted Soviet/Russian actor, best remembered for his titles roles in Sergei Eisenstein's epics ALEXANDER NEVSKY and IVAN THE TERRIBLE. My "Revised Edition(?)" note derives from this statement, on the rear jacket flap: "The book was first published in 1953. Since then Cherkasov has appeared at Leningrad's Pushkin Theatre in the role he had long dreamed of playing -- the role of the talented Soviet poet, Vladimir Mayakovsky. How he worked on the role is described in 'Playing Mayakovsky,' a new chapter added to this edition."

Title: Notes of a Soviet Actor

Author: Cherkasov, N[ikolay] (translated from the Russian by G. Ivanov-Mumjiev and S. Rosenberg)