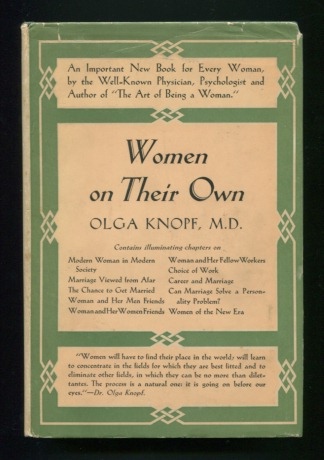 Women on Their Own

(price-clipped) [nice tight clean copy, minimal wear, very light foxing to all edges of text block; jacket lightly soiled at rear panel and spine, but still quite presentable]. The author, a Viennese-born physician and psychologist who had studied under Alfred Adler, came to the U.S. in 1931, announcing to the press that she was here, in the words of one reporter, to launch "a one-woman crusade against the psychological bonds that enslave the fair sex," namely their feelings of inferiority. (The same reporter described Dr. Knopf as "a woman of scholarly mein and forceful personality, [with] decisively short iron gray hair," and drily observed that "if she ever suffered from the inferiority bogy she seeks to exorcise it must have been very long ago.") The following year saw the publication of her first book, "The Art of Being a Woman," a wide-ranging study of the fundamental nature of women and their position in Western civilization. The present work was more specifically concerned with American women and (per The New York Times), their reactions "to the revolutionary changes which have taken place and are still going on in their position, how they are being affected by their constantly enlarging freedom, social, economic and political, and what influence these results may have upon the trends of civilization." (Interestingly, four of the book's ten chapters refer to marriage in their titles.) Both her books gained her a lot of press attention, and Dr. Olga would seem to have been poised to become a bit of a big noise on the American scene -- but she seems to have more or less receded from public view in the years following these two books. (She was reported in 1943 as being a member of the faculty at the New School for Social Research in New York, but I've bene unable to determine how long she might have been in that post.) She did have one last hurrah as an author, however, in 1975, when she published a book entitled "Successful Aging" -- at the age of 86, at which time she was noted as being on the faculty of the Mount Sinai School of Medicine. *** NOTE that additional shipping charges will be requested for international shipping of this somewhat heavy book, or for Priority Mail service within the U.S.; if this concerns you, please contact us for a shipping quote before placing your order. ****

Title: Women on Their Own

Women on Their Own