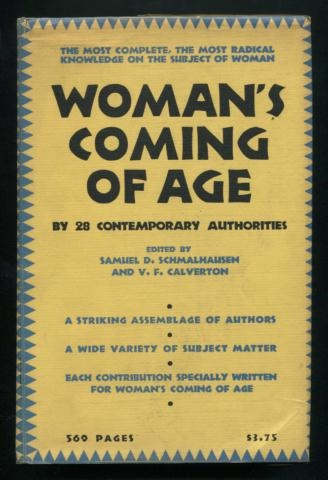 Woman's Coming of Age: A Symposium

[good solid copy, minor bumping to bottom edges of covers; uncoated-paper jacket lightly but evenly soiled, slightly darkened at spine, tiny tears at spine extremities, very shallow chipping at top of rear panel]. The 28 essays in this self-proclaimed "first definitive appraisal of woman in relation to the modern world" are presented under four general headings -- Woman Through the Ages; Psychology and Pathology of the Sexes; The New Woman; Problems and Prospects -- and were all specially commissioned for this ambitious publication, that strives to present "the most complete, the most radical knowledge on the subject of women." (Among the contributors were Margaret Mead, Charlotte Perkins Gilman, Havelock Ellis, and Rebecca West.) And yes, "radical" would seem an appropriate descriptor, as some of the essay titles alone would have raised some eyebrows in much of conservative Middle America: "Man-Made Illusions About Woman"; "How Christianity Has Treated Women"; "The Struggle Against Childbearing"; "Woman as Artist and Thinker" (this was West's contribution); "The Idiot God Fashion" (my favorite title!); "Are Women Monogamous?" (this was by co-editor Calverton, whose own radical-left credentials were impeccable); "The New Status of Women in America"; and "Women in the Class Struggle." The editors lay out their premise in the opening lines of their Introduction: "Only in the last few generations has woman come to realize that she has been the victim of a vast myth. ... In a few words, it was the myth which made her into a being fashioned in keeping with man's will instead of in her own right." **** NOTE that additional shipping charges will be requested for international shipping of this somewhat heavy book, or for Priority Mail service within the U.S.; if this concerns you, please contact us for a shipping quote before placing your order. ****

Woman's Coming of Age: A Symposium