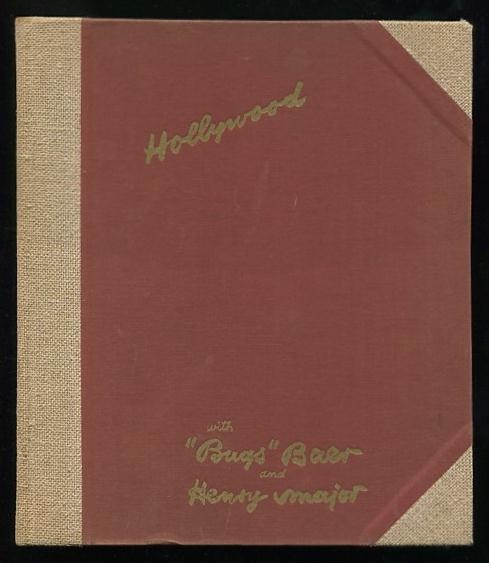 (no dust jacket, as issued) [light shelfwear, a touch of fraying to cloth at upper right corner of front cover]. (caricature sketches) Over 200 full-page caricature sketches of movie people (mostly actors, with an occasional director, writer or local Hollywood character tossed in) by Henry Major, with "Bugs" Baer contributing the captions, which range from moderately clever (Bette Davis: "The discoverer of perpetual emotion.") to corny (Walt Disney: "He gave them all a Mickey.") to just plain weird (Dolores Del Rio: "Only a great artiste can freeze in a blizzard of talcum powder." What does that even MEAN?) These are, I have to say, pretty darn good drawings; Major was a very active illustrator and caricaturist, and the fact that the majority of the sketches (the originals, I mean) were signed by their subjects suggests that he moved easily within the Hollywood crowd. Arthur "Bugs" Baer was one of the country's most well-known newspaper columnists and humorists from the 1920s until the 1960s, and probably knew everybody who was worth knowing in showbiz. ("Edition limited to 800 copies," this being Copy No. 341; SIGNED by both Baer and Major on the limitation page.) **** NOTE that additional shipping charges will apply for international shpping of this heavy book, or for Priority Mail service to U.S. customers; if this concerns you, please contact us for a shipping quote before placing your order. **** Signed by Author & Illustrator