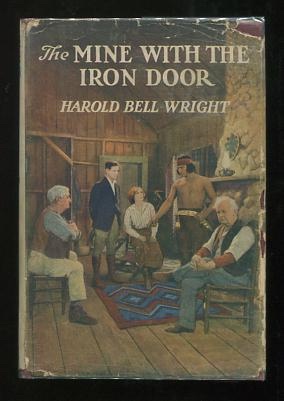 The Mine with the Iron Door [Photoplay Edition]

[a good solid book, just lightly shelfworn, one-time owner's signature and date at top of ffep; jacket has a mid-size chip at base of spine + a smaller one at top right corner of front panel, various other small tears and nicks and general wear]. (4 B&W film stills) "The scene of this intensely interesting story is laid in the Arizona mountains, near the Mexican border. Marta, the heroine, is the adopted daughter of two prospectors, who had rescued her as a child from Mexican outlaws." The story also involves a gold-hunter who's on the lam from the law, a tubercular do-gooder doctor and his mother, and "an Indian who, educated in the schools of the white man, has returned to the wild life of his ancestors, filled with bitterness and contempt toward the whole white race." The film version represented by photoplay edition was produced by Principal Pictures (Sol Lesser) in 1924, and starred Dorothy Mackaill, Pat O'Malley, and Robert Frazer.

Title: The Mine with the Iron Door [Photoplay Edition]

The Mine with the Iron Door [Photoplay Edition]