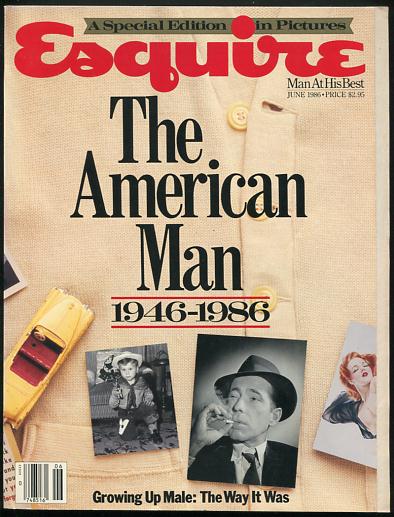 [nice clean copy, virtually as-new; faint traces of removed mailing label on front cover, one tiny tear at bottom of front cover]. (photographs, ads, graphics) One of those massive "theme" issues (in this case, 354 pages) that Esquire used to put out every so often, this one keyed to presenting their very particular Esquire-y "Man At His Best" portrait of what it was like to be A Man in the 1980s -- or, more precisely, what went into the process of BECOMING a man, in America, during that 30-year post-World War II span embedded in the stated theme-title. The quality of the dozens of contributors is quite high -- ranging all over the map (the male map, that is) from bona fide literary giants like William Kennedy, Ken Kesey, Allen Ginsberg and Norman Mailer (writing about himself, of course); to journalistic stars like Gay Talese, Bob Greene, Mike Royko and Roger Kahn; to celebrity commenters of every stripe (Jimmy Carter, John Sayles, Red Auerbach, Billy Joel, Kirk Douglas, etc.) -- and their pieces (ranging from brief half-page ruminations to feature-length articles) are divided into four categories: "At Play" (mostly sports-stuff; "In Love" (mostly sex-stuff, some of it a little cringe-worthy, three decades on); "At Work"; "On Reflection" (this is where they've put the Norman Mailer article, and a Gay Talese piece on Ernest Hemingway; and "In Style" (by which they mean not just clothes and such, but what The American Man should be drinking, smoking, driving, etc.). There's certainly plenty here to snark about -- I mean, it was the Eighties -- but at the same time there's plenty of substance and value, as well. I particularly liked Richard Ben Cramer's long profile of baseball great Ted Williams, and Bob Greene's exploration of the enduring influences of Sloan Wilson's 1955 best-seller "The Man in the Gray Flannel Suit." And of course the entire issue is jam-packed with ads for every kind of luxury consumer goods you can imagine -- including a still-sealed (although possibly no longer potent) sample of Calvin Klein's Obsession for Men. You might just need a rag to wipe the testosterone off your hands when you're finished flipping through.