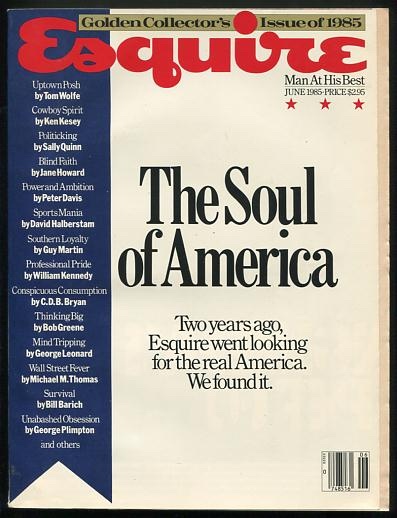 [nice clean copy, minor handling wear only, no subscription label on cover]. (photographs, ads, graphics) Another of those extra-thick "theme" issues that Esquire was so fond of, back in the day, this one the culmination of a two-year project in which the magazine "went looking for the real America [and] found it." The magazine is chock-a-block with interesting pieces on American life, culture and people in the mid-1980s, with the magazine's usual stellar cast of contributors. The writers (and their subjects) include: William Kennedy (an oyster-shucker in Albany, New York); Ken Kesey (rodeoing in Pendleton, Oregon); David Halberstam (basketball mania in Indiana); John Ed Bradley (a Louisiana oilman); Tom Wolfe (apartments in New York's "Good Buildings"); Bob Greene (Dallas real estate magnate Trammell Crow); Charlie Haas (conspicuously-consuming teens in L.A.'s Westwood Village); Joyce Wadler (Jewish humor in the Catskills); George Plimpton (the fireworks king of Norfolk, Nebraska). And much, much more.