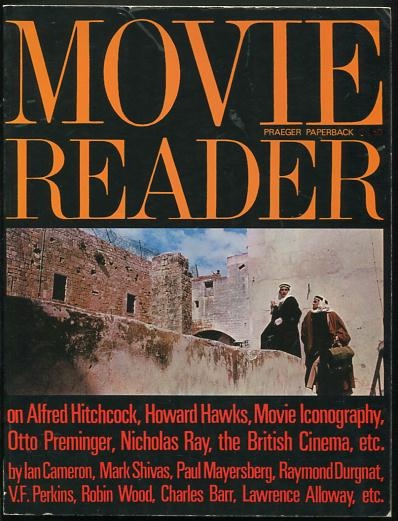 [minor exterior wear, slight curling of front cover, a couple of tiny laminate-lift spots on front cover]. Trade PB (B&W photographs) A selection of articles from the British film journal "Movie," which in its day was the primary U.K. publication following the auteurist line (and in that sense was sort of the anti-Sight and Sound). Not surprisingly, the articles focus on those directors who had been anointed as worthy during the 1960s, first by the French and later by American critics such as Andrew Sarris. Articles (sometimes single pieces, other times groups) are devoted to the following directors and/or individual films of theirs: Alfred Hitchcock, Otto Preminger, Howard Hawks, Nicholas Ray, Joseph Losey, Claude Chabrol, Michael Powell, Frank Tashlin, and Josef von Sternberg. There is also a group of articles on general topics such as the British Cinema and "The Iconography of the Movies," and reviews of nine individual films, among them TOKYO STORY (Yasujiro Ozu), THE TRIAL OF JOAN OF ARC (Robert Bresson), and FREAKS (Tod Browning). Contributors include V.F. Perkins, Raymond Durgnat, Robin Wood, and Paul Mayersberg.