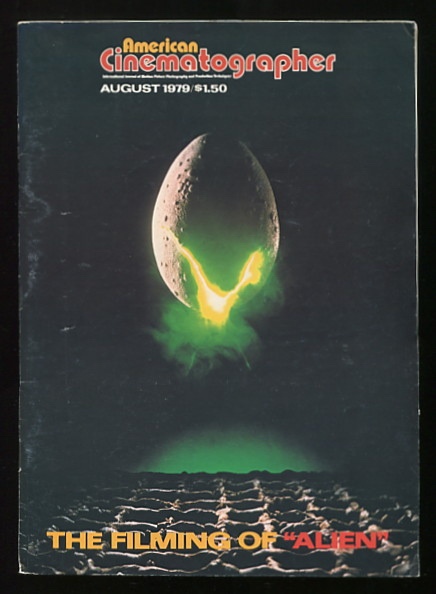 [moderate wear along spine and at edge of covers, a bit of rubbing to front cover, slight bumping to lower corners]. (B&W & color photographs, ads) Monthly magazine of the American Society of Cinematographers, a very technically-oriented publication with plenty of information (articles and advertisements) related to the latest equipment, technical processes and production techniques then in use in the Hollywood motion picture industry. A substantial part of this issue is devoted to the production of Ridley Scott's ALIEN, with a general "behind the scenes" feature plus separate articles by Scott, cinematographer Derek Vanlint, and production designer Michael Seymour. Also in this issue: an article about the creation of the special visual effects for THE CONCORDE--AIRPORT '79, by Abe Milrad; an interview with director Bob Giraldi and cinematographer Eddie Barnett about their "formula for creating award-winning TV commercials"; an article by Tom Frei about techniques for filming tracking shots inside a moving automobile; an article by Stanley Mindel about filming in London's East End; and an account of a visit paid to the film industry in China by a delegation of American film technicians. (We have numerous other issues of this and other film-related periodicals that are not listed online; please inquire if you have particular needs or wants.)