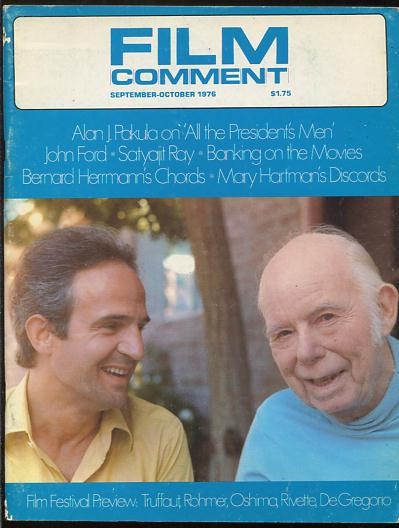 [clean copy, light rubbing to covers, a little wear at spine ends (possibly a touch of insect-nibbling)]. (B&W photographs) In this issue: a discussion of the films of Alan J. Pakula, together with an interview with Pakula about ALL THE PRESIDENT'S MEN; "Banking on Movies," articles by Stuart Byron and Patrick McGilligan on the topic of film financing; analysis of Jacques Rivette's DUELLE, by Jonathan Rosenbaum; an interview with Eduardo de Gregorio, about SERAIL and the influence of Rivette; an interview with Francois Truffaut, about his film SMALL CHANGE (L'ARGENT DE POCHE); analysis of John Ford's THE GRAPES OF WRATH, by Janey Place; an interview with Satyajit Ray; an article about the film music of Bernard Herrmann (including a discography). *** NOTE that we have numerous other issues of this and other film-related periodicals that are not listed online, and we welcome your inquiries and want lists.