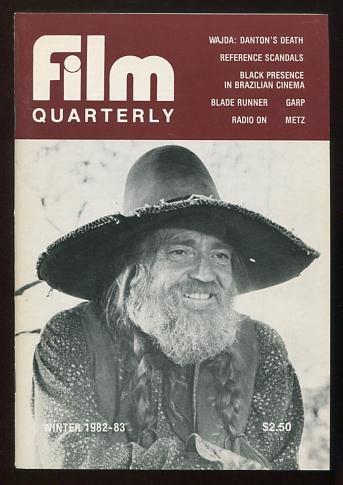 [nice clean copy, just a trace of handling wear]. (B&W photographs) In this issue: an interview with Andrzej Wajda, then in Paris filming DANTON; "The Reference Shelf Shuffle," a critical review of film "encyclopedias, histories, and other supposedly authoritative sources of facts [that] are shot through with error and misinformation"; an article entitled "Slow Fade to Afro: The Black Presence in Brazilian Cinema." Films reviewed: BLADE RUNNER (Ridley Scott), THE WORLD ACCORDING TO GARP (George Roy Hill), ZOOT SUIT (Luis Valdez), RADIO ON (Chris Petit), and BARBAROSA (Fred Schepisi). Books reviewed: the Twayne volumes on Samuel Goldwyn and Lewis Milestone, and Christian Metz's "Psychoanalyis and Cinema." ***NOTE that we have numerous other issues of this and other film-related periodicals that are not listed online, and we welcome your inquiries.